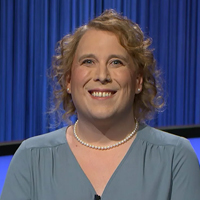 Sonoma County Pride welcomes Jeopardy champion, Amy Schneider. Amy enjoyed a 40-game winning streak during her time on the popular game show, making her the second-winningest contestant ever! Since then, Amy has gone on to become a prominent spokesperson for the trans community, which has included numerous speaking engagements around the country, and a visit to the White House in support of Trans Visibility Day. Amy is currently working on a book about her life, and is eagerly anticipating Jeopardy’s upcoming Tournament of Champions in November.