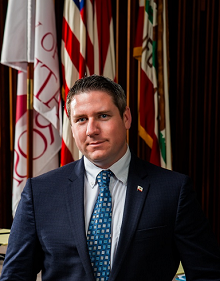 After being elected in 2016 and re-elected in 2020, Chris was selected by his colleagues to serve a two-year term as the youngest Mayor in the history of Santa Rosa. Mayor Rogers represents District 5, which includes the neighborhoods of Downtown Santa Rosa, Railroad Square, St. Rose Historic District, Luther Burbank.

Prior to his council career, Chris served as a legislative aide in Sacramento during his tenure with the California State Senate and State Assembly. He has also worked on renewable energy financing and is currently an administrator for a nonprofit environmental organization.